Like all good organs of its size, Quimby Pipe Organs’ Opus 55 contains all the stops necessary for good liturgical accompaniment and for the successful performance of organ music from all periods. In contrast to most organs, however, the story does not end here, and the new Gano Chapel organ is a very special instrument indeed. For a start, it possesses an unusually high proportion of reed stops, always the sign of a lavish instrument, including some interesting color reeds like the English Horn stop, generally only found on much larger organs. Furthermore, the presence of two contrasting “big” reeds on 15″ wind — the Tuba and Trompette Harmonique — is a luxury rarely found even on the largest instruments. These, used either separately or together, provide a wonderful climax to the sound of the full organ. Among the balanced strings and flutes on every division there are no fewer than three Celeste stops, and two of these strings are even extended down to 16′ pitch. There are, indeed, open 16′ stops on every division — something that is generally only a feature of the largest organs. Good principal choruses on every division are a feature of all good organs, but to have an 8′ Diapason on every manual, and a 16′ Diapason on the Great, is again something of a luxury in an organ of this size. Finally, there is an impressive Pedal division with two 32′ stops, including a real 32′ Contra Trombone. The construction and voicing of the pipes is unusual, making use of thick spotted metal (a lead/tin alloy). This in some cases is carried down to the 5-1/3′ pipe rather than just to the 4′ pipe as is usual. The construction and voicing of the flue pipes in many ways consciously recalls the work of the great English organbuilder T. C. Lewis.

It is not just the tonal resources that make Opus 55 a very special organ. The mechanism features Quimby Pipe Organs’ own design of Johnson-Blackinton slider windchests with electro-pneumatic pallets. Moreover — and this feature is so far unique to the Gano Chapel instrument — these have been combined with a newly-designed compact version of the double primaries that were used in the famous Skinner organs of three-quarters of a century ago. This arrangement produces a mechanism that is extremely kind to the pipe speech and at the same time results in an amazing clarity even in the most rapid passages. To this the QPO system of wind reservoirs and schwimmers adds a wind source that is gently expressive but at the same time free from any hint of instability. 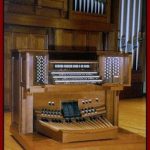 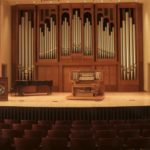 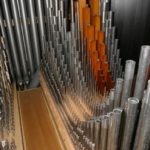 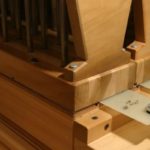 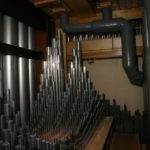 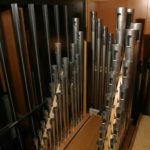 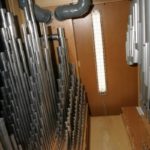 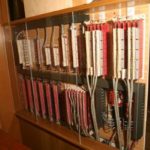 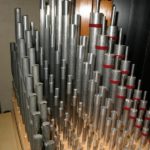