The sanctuary organ of First United Methodist, designed and built by Quimby Pipe Organs Inc., Warrensburg, Missouri, is a four-manual electro-pneumatic instrument with 64 ranks. It contains a total of 3,599 pipes. Instrument layout, tonal design, including voicing procedure, and scaling were accomplished by Michael Quimby.

The casework of the console is of oak veneer. The exposed casework supporting the façade pipes is of poplar with oak veneer. The 54 pipes visible on either side of the chancel are part of the great division principal chorus and are of polished zinc with gold accent at the mouth of each pipe. Above each set is a natural oak wood veneer ‘flame’ visually connecting with the United Methodist denominational symbol. The horizontal Trompette-en-chamade located in the antiphonal gallery is of polished copper with flared bells.

The console was designed by Michael Quimby and Richard Miller. The drawknobs and tilting tablets are from Harris Precision Products. The key and stop functions are controlled by a Solid State Logic multiplex relay system. The combination action by Solid State Logic with 24 levels of memory has three ventils, four crescendo settings of which three are programmable by the organist and a sforzando reversible which is inclusive of stops drawn and independently adjustable on each memory level.

All new pipes were constructed according to the specifications of the organbuilder by A.R. Schopp’s Sons Inc. and Thomas Anderson. The reed ranks were voiced by Fred Oyster and Robert Schopp. Voicing of certain stops and assistance with tonal finishing was provided by John Hendriksen. Electronics are used for notes 1-12 of the 32’ Bourdon. The English Horn rank is the first to be built in the exact Æolian -Skinner style in the past 20 years. Michael Quimby made this possible by acquiring the patterns from the former Æolian–Skinner head pipe maker, Thomas H. Anderson. 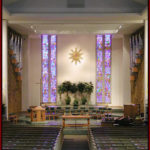