In 1932, when E. Power Biggs, one of the most prominent organists of the 20th century, arrived at Christ Episcopal Church on the campus of Harvard University in Cambridge, Massachusetts, he found the church possessed a two manual Hook & Hastings organ, Opus 1167 of 1883, listed on the Hook & Hastings opus list as having 25 registers. Among the choristers in Biggs’ men-and-boys choir was a youthful Charles Fisk, later to achieve fame as one of the more significant American organbuilders of the second half of the twentieth century. The inadequacies of the Hook & Hastings organ must have been very apparent to Biggs, though the rector fired him in 1935 for neglecting his duties – Biggs already had a very full recital program which often drew him away from his church work at this time – and he did not remain organist long enough to see the Christ Church organ replaced. Erroneously, many have given E. Power Biggs the credit for the decision to purchase Æolian-Skinner Opus 1007 and in developing the instrument’s tonal specification.

Christ Church, Cambridge signed a contract with the Æolian-Skinner Organ Company of Boston, Massachusetts for a new organ, the firm’s Opus 1007, on June 5, 1940. G. Donald Harrison was responsible for the organ. He was tonal director and President of the Æolian-Skinner Company and probably the world’s foremost organbuilder of his day. As in a few other instruments, including the organ for St. Mary the Virgin (Episcopal), New York, Harrison collaborated with Ernest White over the tonal design of the Cambridge organ. This collaboration resulted in an instrument in some ways atypical of Harrison’s work – rather more clear and brilliant than most but somewhat lacking in basic fundamental tone. White’s ideas were taken to extremes when he was tonal director of the Hagerstown, Maryland firm of M. P. Möller, Inc., in the 1960s, but in this earlier period and moderated by the influence of Harrison they resulted in quite an impressive design in the “American Classic” style.

The Christ Church, Cambridge organ duly emerged from the Æolian-Skinner workshop in 1941 and created quite a stir in the organ circles of its day for being what was then a very progressive and enlightened design. The instrument was featured on the company’s 78 R.P.M. promotional recording “Studies in Tone.” Unfortunately, however, in its original location the instrument suffered from less than desirable acoustics. The instrument was very large for the building and had to be crammed into every nook and cranny of the rather inaccessible chambers. The instrument was hopelessly buried and the sound was never able to get out properly. Furthermore, the building, which dates from 1761, is extremely poor for sound and the acoustics only exacerbated the shortcomings of the layout. By the turn of the twenty-first century the mechanism needed rebuilding and was also becoming very unreliable, so that there were numerous ciphers during the services. The church therefore decided to replace the pipe organ with a completely new one. The new organ was built by Schoenstein & Company of San Francisco as their Opus 149 of 2005. It is similar in size, with three manuals and fifty ranks, and has a much better layout. It was completed in 2006.

Christ Church, Cambridge advertised their vintage organ, Æolian-Skinner Opus 1007, for sale and an agreement was reached for its purchase with St. Theresa Catholic Church in Sugar Land, Texas. St. Theresa Parish engaged the Warrensburg, Missouri firm of Quimby Pipe Organs, Inc. to remove the pipe organ, rebuild it and reinstall it in their church. The fine vintage pipework, much of it made of the highest quality frosted tin, was carefully restored and the voicing adjusted to compensate for the original lack of fundamental. New cases were designed by Father Stephen B. Reynolds, and the church’s architect, Duncan Stroik, and a new and more effective layout was planned. Furthermore with the very satisfactory acoustics of the St. Theresa Catholic Church the instrument now has an acoustical environment that enhances its sound, rather than detracting from it as the acoustics of the Cambridge church had done. The transformation has been amazing and the organ now sounds like the magnificent instrument that it always potentially was but which in practice it never had the opportunity to become. 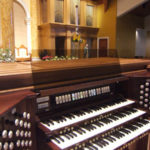 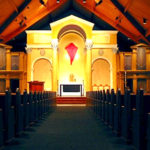 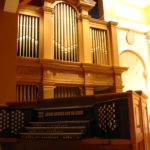