The pipe organ for Saint Peter’s Church was built by the Aeolian-Skinner Organ Company of Boston, Massachusetts in 1958 as Opus 1337 for the First Church of Christ, Scientist, Fort Wayne, Indiana. In the spring of 1998, the instrument was purchased by Saint Peter’s Church for rebuilding and installation by Quimby Pipe Organs, Inc., Warrensburg, Missouri. The instrument, as rebuilt, is a three-manual electro-pneumatic instrument with 37 ranks and 2,218 pipes. The organ case is from the original Tellers-Kent Organ Company installation.

A three manual 1978 Reuter console provided for this installation has been refinished, rebuilt with draw knobs, coupler rail, and marker plates in the Aeolian-Skinner style to reflect the instrument’s heritage. The draw knobs and tilting coupler tablets are from Harris Precision products. The key and stop functions are controlled by a Peterson-Electro Musical Products diode matrix switching system. The combination action, also by Peterson, has 32 levels of memory.

The key, stop action, and reservoirs of Aeolian-Skinner Opus 1337 and all other windchests have been completely restored with new CPL leather. 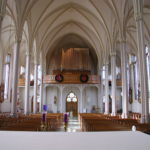 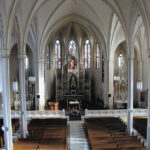