In 1863 the organ building firm of E&GG Hook of Boston, Massachusetts, constructed a new organ, their Opus 326, for the Congregational Church in Shawmut Street, Boston. The instrument dates from a period when numerous fine craftsmen, such as J. H. Willcox, Frank Hastings, George Hutchings and Charles Ryder were working for the Hook firm, most of whom later had their own organ companies. Many organ historians argue that the instruments built by E&GG Hook during the 1860’s were among the finest instruments ever built in the United States. Opus 326 would probably have been under construction in the Hook workshop at the same time as perhaps their most celebrated organ, Opus 322, built for the Jesuit Church of the Immaculate Conception in Boston, an organ that still survives today. The sound of the two instruments is in many ways very similar. The Shawmut Street Church, however, soon decided that they needed a larger instrument, and in 1866 they purchased Hook Opus 398. Thus, according to the history researched by the late Alan M. Laufman, the Shawmut Street Church traded Opus 326 back to E&GG Hook only three years after it was installed in their church. On the other hand, during the course of rebuilding, Quimby Pipe Organs discovered that there are dates on the pipework ranging from 1862 to 1866, suggesting that the decision to buy a larger organ may have been made while Opus 326 was still under construction, so that the instrument perhaps never made it to the Shawmut Street Church after all. According to that scenario, construction would have been halted part way through and only resumed when a new customer had been found for the instrument.

In 1866 a committee from Pine Street Congregational Church in Lewiston, Maine bought Opus 326 for their church. The Shawmut Street Church had an organ chamber and a simple screen sufficed to enclose the organ. The Lewiston Church, however, needed an organ case and so the beautiful walnut casework that graces Opus 326 was constructed in 1866. A legend that may or may not be true has it that as soon as the contract had been struck between E&GG Hook and the Lewiston committee the firm received an offer from another church that did not involve building a new case. Mr. Hastings then ran after the Lewiston committee to the railroad station and tried to persuade them to back out of the deal. The committee, however, were resolute and the organ with its lovely new case went to Lewiston. As originally built Opus 326 had an all-mechanical action, but in 1923 the original builders, now named Hook, Hastings, & Co., rebuilt the organ, making a couple of minor tonal changes, and providing an electro-pneumatic mechanism and a new detached console. Hook & Hastings designated this rebuilt organ as their Opus 2478.

In 1940 the Pine Street Congregational Church in Lewiston merged with the Universalist Church as the Federated Church of Lewiston, and the old Pine Street Church was demolished. At this time the Foss Street Methodist Church in Biddeford, Maine was looking for an organ and they purchased Opus 326 from the Lewiston Church for $850. In 1999 the Foss Street Church in Biddeford closed its doors due to a dwindling congregation and the building has since been demolished. The late Alan M. Laufman, Founder and Executive Director of the Organ Clearing House, realizing what a fine instrument Hook Opus 326 was, and determined to rescue it. The organ was dismantled by the Organ Clearing House and stored in Harrisville, New Hampshire until a new owner could be found.

The new owner proved to be St. John’s Episcopal Church in Quincy, Illinois. The church signed a contract with Michael Quimby of Quimby Pipe Organs, Inc., of Warrensburg, Missouri, to rebuild the organ and relocate it to their church. Here it was to replace St. John’s original organ, built by the Marshall Brothers of Milwaukee in 1872. The Marshall organ had been rebuilt with a tubular-pneumatic mechanism by George Kilgen & Son of St. Louis in 1912, and it had been rebuilt again and the action electrified in 1957-58 by the Temple Organ Co. of St. Joseph, Missouri, to the designs of Dr. Robert Noehren. By the end of the twentieth century this instrument had, however, come to the end of its useful life and was not considered worth rebuilding. So the Hook organ was procured and moved from Harrisville to Quimby Pipe Organs’ storage facility in Warrensburg to await rebuilding. It is very fortunate indeed that the Hook organ was safely in Warrensburg and not in Quincy on the night of August 23, 2002, when lightning struck St. John’s and the church interior and roof, including the old pipe organ, burnt to the ground. Happily, St. John’s has risen phoenix-like from the ashes and thanks to the acoustical consultants, Kirkegaard & Associates, has gained three seconds of reverberation in the process, making it an even finer building for music than it was before.

When it came to renovating the Hook organ, the original plan was both to rebuild the original 1863 windchests and to re-use the 1923 Hook & Hastings console. When rebuilding commenced, however, it was discovered that the console was of rather flimsier construction than had been thought, so Quimby Pipe Organs obtained and rebuilt a secondhand Skinner console and fitted it with a new Peterson solid-state control system. They also found that the original Swell and Choir manual slider windchests had been severely water-damaged by roof-leaks in the previous church in Maine, and the decision was made therefore to replace them with new Blackinton-style slider windchests without slider seals, fitted with electro-pneumatic pallets. This proved to be just as well, since QPO also discovered that the 1923 Hook & Hastings electro-pneumatic pull-down actions were extremely deficient in their design and painfully slow in their operation. The making of new chests has provided the opportunity to overcome all these deficiencies in order to provide a rapid and responsive mechanism for the pipes to speak, but in the interests of historical accuracy, QPO was careful to retain the same layout of the pipework on the new Great and Swell slider windchests. QPO also replaced the wooden pipes of the lowest octave of the Swell 16 ft. Bourdon stop, which had like the windchests succumbed to the roof-leaks in the Biddeford Church, with twelve pipes from a stop by former Hook employee George Hutchings.

QPO’s head voicer, Eric Johnson, took extreme care to ensure that the voicing of the original E&GG Hook pipework remained unchanged. Important in preserving the original voicing was the decision not to lower the pitch, which remains at its original a0 = 448 Hz. It is believed that the reeds in particular retain their original sound as voiced by George Greenleaf Hook himself, and in this respect they are a rare survival. The Oboe stop nearly did not survive. Many of the pipes were badly mutilated so Michael Quimby instructed QPO head pipemaker Tim Duchon to make a replica stop. When he came to work on it, however, Tim Duchon said that he thought he could restore the original stop after all, and in doing so he has succeeded in saving what has proven to be an extremely attractive Oboe. Noteworthy among the reeds is George Hook’s Swell Cornopean, which has open English shallots and is fiery and brilliant. Its power is carried right up to the top of the keyboard in spite of the fact that it has no harmonic trebles. It is a dead-length reed, but unlike some twentieth-century examples is extremely stable with regard to tuning. The Great Trumpet is of approximately equal volume but rather darker tone.

The choruses, as well as the reeds, are outstanding. All three Diapason choruses are extremely clear and brilliant in spite of being based on very generously-scaled and rich-sounding unison stops. As would be expected the Great chorus is a little louder than those of the Swell and the Choir, which are of approximately equal power but of very different character. The Swell Mixture was deliberately designed by the Hook brothers to break back more slowly than the one on the Great, so that the Swell Mixture becomes more prominent in the treble and reinforces the brilliance of the reeds. Many of the individual flute and string registers are also noteworthy, including the slightly “nasal”-sounding Keraulophone – a string stop that is very rare in organs these days – and the hauntingly beautiful Clarabella.

Although the original tonal character was meticulously preserved, QPO has nevertheless made some minor modifications to the tonal design of the organ as requested by the Church. In 1923 Hook & Hastings had replaced the original Swell string stop with a rather poorly designed modern one quite out of sympathy with the original pipework, and QPO has replaced this with another string similar to what would originally have been there. The Oboe and Clarinet, which previously ran only to Tenor C, have been made full compass by the addition of twelve new pipes each. The Choir Organ has gained a 4 ft. Principal and 2 ft. Flautino, and the Pedal Organ a 4 ft. Octave stop, all using genuine pipes from another Hook organ within the same decade as Opus 326. The organ had never previously had a 16 ft. Pedal Bourdon, so the opportunity was taken to add one. This is another Hutchings rank and speaks on its original windchest. QPO has also added a magnificent Victorian 16’ Pedal Trombone, made by New York organbuilder Frank Roosevelt. The crowning glory of the instrument is the new QPO Harmonic Trumpet, which is voiced on a wind pressure two-and-a-half times that of the rest of the organ. The original Great Trumpet and Swell Cornopean are carefully matched in their volume and graded in their brilliance, and the new Harmonic Trumpet is specially designed to complement them. 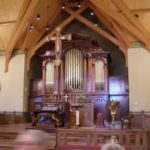 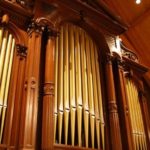 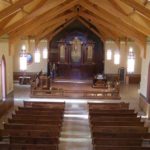 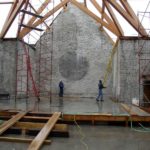 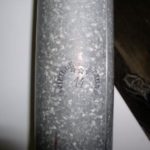 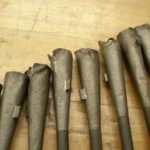 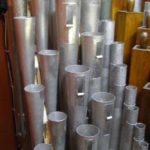 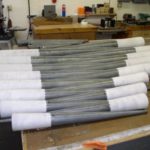 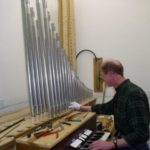 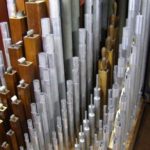 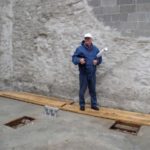 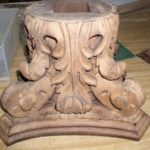 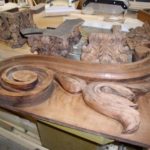 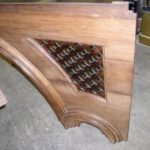