The pipe organ for Saint John LaLande Church was originally built in 1870 by the Marshall Brothers Organ Company, Milwaukee, Wisconsin, for the Grand Avenue Methodist Episcopal Church, Kansas City, Missouri. The organ had tracker or mechanical action and wind was supplied by handing pumping. The organ, upon construction of the present Grand Avenue Temple United Methodist Church in 1912, was reinstalled in the Assembly Hall by Ernest M. Skinner Organ Company, Boston, Massachusetts.

Electro-pneumatic action to control the original slider windchests and an electric Spencer blower were provided at that time. Additionally the Skinner company replaced the Swell Salicional stop with one of its own design and a Voix Celeste to go with it. The Swell Flautino 2′ and Great Trumpet 8′ and Mixture III were removed.

During the Great Depression, this instrument was sold to the First Church of Christ, Scientist of Kansas City, Kansas. When that church’s congregation sold its building in 1993, the organ was once again for sale. Quimby Pipe Organs Inc. purchased the instrument in July 1994. Ron Sontag, in consultation with John Schaefer, canon musician at Grace and Holy Trinity Cathedral (Episcopal) felt the instrument, after rebuilding, would be well suited for Saint John LaLande Church.

The instrument reflects the fine tonal characteristics of English organ building during the mid 19th century. John Lancashire, a master organ builder, came to the United States in 1864 to install a Willis pipe organ from London, England, in Grace Church, Ripon, Wisconsin, which had been purchased by the Marshall Brothers firm. The Marshall brothers persuaded Lancashire to join them in organizing an organ factory which became known as the Marshall Brothers Organ Company. Lancashire in turn persuaded three Willis employees to join the enterprises: Charles S. Barlow, the key maker, Edward “Ted” Harris, an excellent pipe maker, and William H. Turner.

The organ has been rebuilt with new electro-pneumatic slider windchest, a new all-electric two manual and pedal console (which features a multi-level capture combination action and multi-plex switching system), a new case incorporating the bass pipes of the Great Principal 8′, new blower, and the replacement of the missing Great Mixture III fabricated from scales known to have been used by the builder.

The organ contains 1,150 pipes constructed of various alloys of tin and lead and zinc and wood. Vintage pipes for replacing the missing Great Trumpet 8′ and the Swell Flautino 2′ are available for installation when funds are secured. 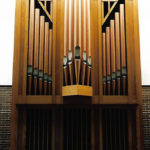 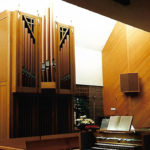 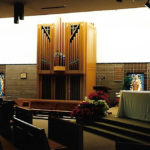