Nestled between densely wooded hills and the constantly-changing currents of the “Big Muddy,” better known as the Missouri River, is a picturesque community known as St. Joseph, Missouri. A part of this community recently regained a piece of history; St. Francis Xavier Church, built in 1902, received back their two-manual 1972 Möller Pipe Organ after extensive rebuilding and upgrading. The organ, which formerly stood atop a concrete shelf above and behind the alter, was re-sited directly behind the restored reredos removed in 1971 creating a freestanding case. Façade pipes were placed in the niches, where statues once were, leaving the reredos as an elegant, ornate organ case.

The pipe organ received a new solid-state Peterson Electro-Musical Products multiplex switching system to control all windchest key and stop functions; a new multi-level 32-level capture combination action with specified pistons, reversibles, and generals; required Astron AC/DC rectifiers to provide current for the instrument’s direct-current action; new QPO electro-pneumatic unit windchest for additions and for pipes 1-12 of the 8′ Principal; and new solid windlines were provided. Additionally, new building frame supports and structure to extend the existing swell box from the rear and also additional building frames and supports to extend the Great Division from the rear were added. Organ pipes for additions were provided as specified in the following tonal specification, and all existing pipes retained from the existing organ were revoiced for the new tonal scheme, repaired as required, and new tuning slides were provided. 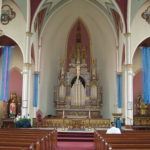