The pipe organ for SkyRose Chapel is a four manual instrument of 65 ranks, which contains 3,937 pipes. The Solo division played from the fourth manual features several historical reed ranks built by the Skinner and Aeolian-Skinner Organ Companies of Boston, Massachusetts. These include the Tuba (c. 1924), French Horn (c. 1946), English Horn (c. 1946), and Corno di Bassetto (c. 1946). The instrument is provided with Chime and Harp stops. The 20 tubular Deagan Class A Chimes built in 1924 are played by an electro-pneumatic striking action and the restored Harp with 61 bars and resonators featuring their original electro-pneumatic action was built by the Skinner Organ Company in 1929.The visible casework for the SkyRose pipe organ is constructed of oak and contains 38 painted zinc pipes with pipe metal mouths painted gold and nine oak pipes. The pipes in the central case are functional and are part of the Pedal 32-16-8′ Principal, and Great 16′ Violone. The longest pipe in the facade is 32′ G of the Pedal Principal rank. The wood pipes in the side case are part of the Pedal 16′ Bourdon rank. The pedal organ contains a full length 32′ Posaune which is located in the alcove behind the exposed wood pipes.The exterior of the console was designed in consultation with Fay Jones and Maurice Jennings. The parts of the console played by the organist include 133 drawknobs on each side of the manuals which control the stops and intra-manual couplers, and the coupler rail above the keyboards containing 30 couplers allowing the organist to couple one or more manuals to another. The manuals, drawknobs, and tilting coupler tablets were constructed by Harris Precision Products, Whittier, California. The key and stop functions are controlled by a Peterson Electro-Musical Products Multiplex relay system which includes a MIDI, allowing the instrument to be played from a sequence recorder. The combination action controlled by thumb pistons beneath the keys of the manuals and various toe pistons and paddles above the pedal board, also by Peterson Electro-Musical Products, has 99 levels of memory, piston sequencer, three general ventil pistons to control Reeds Off, Mixtures Off, and Manual 16’s and Pedal 32’s Off, three ensemble pistons, and three programmable Crescendo settings.The wind for the pipes is provided by blowers that equal 11 HP. The wind for playing the pipes is stored in 14 reservoirs and four schwimmers regulated to the required wind pressures. Wind pressures range from 15″ measured by water gauge for the Tuba to 4″ for the Choir division.Members of Quimby Pipe Organ, Inc., making significant contributions in the construction of the instrument are Doug Christie, Chris Emerson, Charles Ford, Johanna Harrington, Eric Johnson, Kevin Kissinger, Brad McGuffey, Michael Miller, Gary Olden, Michael Quimby, Wayne Shirk, Stan Sparrowhawk, Elizabeth Viscusi, and Randy Watkins. 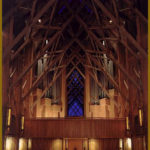 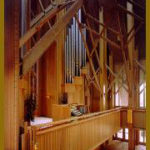 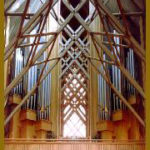