The pipe organ for Saint Andrew’s Episcopal Church, designed and built by Quimby Pipe Organs, Inc., Warrensburg, Missouri, is a four manual instrument of 65 ranks. It uses Blackinton-style electro-pneumatic slider windchests and electro-pneumatic unit winchests for extended ranks. It contain 3,640 pipes, of which 2,219were retained from the previous 40-rank Aeolian-Skinner organ opus 1411 and revoiced for the new location.

The new casework for the cancel organ is constructed of oak and contains 34 polished zinc pipes with tin mouths. The pipes in the case are functional and are part of the Great 8′ Principal, Pedal 8′ Principal and Pedal 16′ Principal stops. The antiphonal organ, which was the previous organ’s Great division, features the Hooded Tuba stop, which is based on examples of the 19th century English organbuilder Henry Willis I. The Pedal organ contains a full length 32′ Contre Bombarde to low GGGG with the remaining seven pipes being half length. These pipes are located in the old organ chamber.

The console for this installation was built with drawknobs, coupler rail and marker plates in the Aeolian-Skinner style to reflect the heritage of the previous installation. The drawknobs and tilting coupler tablets are from Harris Precision Products. The key and stop functions are controlled by Solid State Logic multi-plex relay system with player. The combination action, also by Solid State Logic, has 32 levels of memory, four ensemble pistons, four crescendo settings of which three are programmable by the organist, and a sforzando reversible, which is inclusive of stops drawn and independently adjustable on each memory level.

All new pipes were constructed according to specifications provided by the organbuilder by A. R. Schopp’s Sons Inc., and Thomas H. Anderson, former pipe shop foreman at Aeolian-Skinner. Electronics are used for notes 1 through 12 of the 32′ Contre Bourdon. John H. Hendriksen, former head flue voicer for Aeolian-Skinner, revoiced the original Aeolian-Skinner pipe work and four new ranks, including Hooded Tuba, in consultation with the builder. The tonal design of the entire instrument and voicing and scaling procedures of the new chancel Great division were accomplished by the builder. 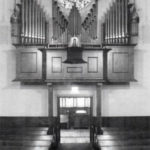 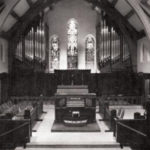