Quimby Pipe Organs, Inc. recently completed the rebuilding and installation of the 1912 Casavant organ in the Robert E. Jacoby Symphony Hall, Jacksonville, Florida. This project marked the formal completion of the 1,846 seat performance facility dedicated to the Jacksonville Symphony, reflects the Symphony’s decision to become the first American orchestra to install a rebuilt, historic organ in a new concert hall.

Casavant Opus 553 was contracted in 1912 and built in 1914 with four manuals, 63 stops, 70 ranks for the First Baptist Church of Syracuse, New York. In the late 1980’s, when the congregation moved to a new building in the suburbs, the organ was put into circuitous storage that took it from New York to Illinois to Florida to finally back again to Illinois. Then, in early 1996, the Jacksonville Symphony found it in a warehouse in Chicago and was delivered to Quimby Pipe Organs in Warrensburg, Missouri in 1997 for rebuilding and restoration.

An inventory revealed that storage had taken its toll on the organ: most of the Casavant windchests were discovered to be beyond repair, either through dry rot or water damage; many metal pipes were severely damaged and numerous pipes were smashed flat; wooden pipes were found to have split seams, either through water damage or extreme dryness. What was expected to have been a fairly typical rebuilding was fast turning into a massive restoration.

All flue pipework was restored in QPO’s pipeshop by Christopher Emerson, pipemaker, with extensive help by Thomas Anderson. Dents were removed, smashed pipes were cut apart and remade, and all metal pipes were cleaned and fitted with new tuning slides. All stopped wood pipes were repacked, and split seams reglued as necessary. One significant challenge involved maintaining the tonal integrity of the reed ranks wile raising their pitch to A440. Head voicer Eric Johnson performed restorative revoicing to re-pitch the reeds, utilizing the original tongues as much as possible. The rise in pitch increased the overall power of the reeds significantly. The Great/Choir 16′-8′-4′ Tuba Mirabilis unit, recast on 25″ to meet the requirements of the hall, provides a thrilling climax to the organ.

The organ stands in a loft 50′ wide, 32′ high and 14′ deep above and behind the orchestra platform. Composed of painted copper pipes of the Great First and Second Diapsasons, the Pedal 8′ Octave, and the Great 16′ Double Diapason, the tripartite facade, designed by Charles Ford, provides the visual focus for the room. The Great and Pedal occupy the central section with the commanding (formerly enclosed) Tuba Mirabilis placed high at the center of the organ. The Solo is housed in the left section, and Choir is placed above the Swell in the right section. The Echo occupies a chamber 70′ above the floor in the ceiling of the auditorium, providing an ideal location for its subtle, atmospheric effects. As in the original Syracuse installation, the Echo is winded from the main blowing plant.

A few voices have been added to the organ in its present installation. Mixtures and mutations have been added to enhance the Swell and Choir choruses; two celestes have been added to the organ’s softest existing voices; existing tenor C celestes have been extended to CC, and a 4′ Clarion now completes the Swell reed chorus. The Choir Mustel Celesta was re-pitched to A440. The two Solo divisions (from 1914 and 1917) have been united as one. The 1957 Console has been rebuilt using solid-state actions. Apart from the windchests for the Echo, the Solo Gross Flute and Tuba Mirabilis unit chests, various bass ofset chests and the 1973 Casavant pedal chest, all pipework sits on new electro-pneumatic pitman windchests. The organ now contains 97 ranks, 80 stops, 6,215 pipes and weighs nearly 20 tons. 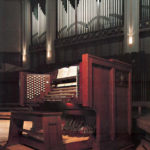 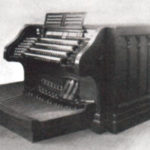 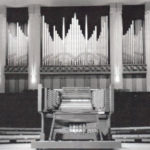 Listen to the Quimby sound as Andrew Clarke plays the historic Casavant Pipe Organ in the Robert E. Jacoby Symphony Hall of the Times-Union Center for the Performing Arts, Jacksonville, Florida. All tracks are available on our YouTube Channel.