The pipe organ for Northminster Presbyterian Church (The Roy A. Johnson Memorial Organ), is a three manual instrument of 46 ranks based on an eclectic design. The tonal design is a synthesis, resulting in a concept that is distinctly American.The tonal specification was designed in consultation with John Brobeck, organist, and Stardust Johnson, director of music. The instrument features Blackinton-Johnson style electro-pneumatic slider windchests and electro-pneumatic unit windchests for extended ranks.The Northminster organ contains 2,709 pipes, of which 653 were retained from the previous instrument and revoiced for the new tonal specification. The pipes range in size from over 16 feet in length to those smaller than a pencil. The metal pipes are constructed of various alloys of tin and lead for those shorter than 4′ in length and a zinc alloy for pipes longer than 4′ in length. Several ranks are constructed entirely of wood including pipes 1-12 of the 16′ Contrabass which are mitered to fit the balcony ceiling height.The visible casework is constructed of poplar painted white and contains polished zinc pipes with the mouths painted gold. Pipes 1-12 of the great 8′ Principal are located in the organ case. The wood pipes in the left balcony transept are those of the pedal 16′ Bourdon.The console for this installation was built with drawknobs, coupler rail, toe studs, kick paddles, pedal board, manual key cheeks, and marker plates in the Aeolian Skinner style in memory of Roy Johnson, who admired the elegance and feel of their consoles. The key and stop functions are controlled by a solid state multiplex relay system. The combination action has 99 levels of memory and features a programmable crescendo and sforzando. 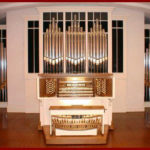