The first half of the last century left the United States with a legacy of magnificent organs by first-rate builders such as Skinner, Casavant, Möller and Kimball, but unfortunately, many of these instruments were later spoiled under the influence of the classical revival. They were often rebuilt with neo-baroque accretions poorly fitted to the concept of the original organ. Transforming such a radically rebuild organ into one that possesses an artistic integrity is by no means a simple task. In the case of the First Baptist Church in Jackson, the issue was further complicated by the need to provide an instrument adequate to the church’s wide-ranging liturgical requirements, also taking into account the constraints of a very large building that seats over 3,000 and has acoustics that are far from lively. Quimby Pipe Organs responded to this challenge by building a five-manual-and-pedal instrument of 155 ranks in the Anglo-American “Romantic-Symphonic” style. The commission required them to redevelop high-pressure voicing techniques that were lost for three quarters of the century.

The original kernel of the First Baptist Church’s instrument was a four-manual-and-pedal 72-rank instrument, Opus 535, which E.M. Skinner & Son constructed for the church in 1939. By all accounts, this was a fine instrument, and it is unfortunate that it was subsequently rebuild out of all recognition. M.P. Möller rebuilt the Skinner organ in 1972, adding a number of stops that were considered essential in the light of the classical fashion then prevailing. The major change, however, came in 1989 at the time when the worship space was quadrupled in size. The Canadian firm of Keates-Geissler radically enlarged the organ, resulting in an instrument of five manuals with no fewer than 231 ranks. In their rebuild, Keates-Geissler utilized much of the pipework from the 1929 five-manual-and-pedal Casavant Frères organ, Opus 1312, build for the Royal York Hotel in Toronto. For a long time many people considered this organ to be Casavant’s finest instrument. Keates-Geissler revoiced much of the Skinner and Casavant pipework, lowering the pressure and adding a great deal of additional upperwork, so that the instrument ended up with more than a hundred ranks of mixtures. The organ proved, with the passage of time, to be unsatisfactory in serving the musical requirements of worship.
Realizing that radical change was called for, Larry Black, the church’s minister of music, and Any Swanner, associate minister of music and senior organist, contacted John Obetz to serve as consultant. At the end of the process, Quimby Pipe Organs Inc. of Warrensburg, Missouri, was selected to carry out the task of creating a new instrument that would have artistic integrity, that would be adequate to the diverse musical requirements of the church, and that would make use of the best pipework from the old organs. In order to accomplish these goals, Michael Quimby, tonal director and president, and Eric Johnson, head voicer, made a careful study of techniques of pipe construction, voicing, and winding that had been abandoned during the classical revival that began in the 1930s. In particular, they visited the Skinner organ, Opus 722, in Woolsey Hall at Yale University in New Haven, Connecticut, and examined the Kimball organ, Opus 7119, in the War Memorial Auditorium in Worcester, Massachusetts. They also drew on their extensive experience of rebuilding and restoring older instruments, especially the rebuild four-manual-and-pedal Casavant organ, Opus 553 of 1912, which Quimby Pipe Organs had installed in the Jacoby Symphony Hall, Jacksonville, Florida, in 2001. Using the knowledge garnered in this way, the Quimby firm took the best of the pipework from the church’s previous organs, revoiced and rescaled it to fit with Michael Quimby’s concept of the instrument, and added an additional 64 ranks to create the new organ. Nineteen ranks that remained from the Skinner organ, nine ranks from Möller’s rebuild, and 63 ranks from the Royal York Hotel Casavant were incorporated.

The new organ, which is Quimby Pipe Organs’ Opus 60, has eleven divisions spread over five manuals and pedals, with 155 ranks and over 9,000 pipes. Most of the instrument is located in chambers on either side of the baptistery, which is behind the choir at the front of the church, behind flamed copper pipe facades from the Keates-Geissler installation. The Antiphonal and Echo division are separated from the rest of the instrument at the back of the church. The entire organ in estimated to weigh approximately 35 tons. The key action is electro-pneumatic throughout, and each windchest is designed to produce the optimum speech for the particular pipes placed on it. Thus, there are new electro-pneumatic pallet slider windchests in the Blackinton style for the lower pressure fluework (5” wp), new pitman windchests for most of the higher-pressure fluework and a majority of reeds (7 ½ “, 10”, 15” and 20” wp), and unit windchests for various reeds and extended ranks. A few Pedal and offset windchests retained from the Skinner and Casavant instrument were restored and incorporated into the new organ. The organ is winded by 35 cone-valve reservoirs, which are supplied by three Spencer blowers and one Laukhuff blower, amounting to 57 horsepower in all. The six enclosed divisions have swell boxes with two-inch thick swell shades. The woodwork from the previous drawstop console was restored and fitted with new components. The console is equipped with a solid-state combination action with 256 memory levels and all the usual modern aids to registration.

This is obviously and organ constructed very much in the “Heroic Style”, and unusual for recent decades in being a high-pressure instrument, with the Great, Choir and Swell fluework at 7 ½“ wind, and wind pressures elsewhere in the instrument of up to 30”. The instrument is definitely heroic, particularly the exceptionally weighty Pedal division, as it needs to be in this building, but great care was exercised throughout to ensure that the voicing does not sound forced. Eric Johnson, Quimby Pipe Organs’ head voicer, deserves particular credit for voicing the reeds, the crowning glory of the organ, in a style reminiscent of the work of William Cyples Jones (1874-1967), who voiced the reeds for many of the finest organs in early 20th century England. There are no new digital stops anywhere in the organ, and three of the four 32’ Pedal stops are full length all the way to low C. The existing electronic Schulmerich carillon bells were retained. Despite being designed as a “Romantic-Symphonic” organ, the instrument possesses a chameleon-like versatility in its ability to handle all styles of organ music, including compositions from the Baroque and Classic period. For example, played with the Second Diapason, the Great chorus has a classical feel to it, displaying a marked kinship in its timbre with North German organs, and as such it is ideal for playing Bach. On the other hand, with the big (scale 38) First Diapason drawn, the effect shows kinship to large Romantic instruments such as the Arthur Harrison organ at St. Mary Redcliffe in Bristol. Even theatre organ effects are possible- there is an extended Tibia on the Orchestral division (with a tremolo that really makes it “sob”!), and a 16’ Diaphone on the Pedal. The later forms the bass to the Fanfare 8’ Tuba Mirabilis, making it available as a 16’ stop on the Pedal. Some stops are of unique construction. An instance if this is the Great 8’ Harmonic Flute, which is of large scale and enormous power, and has extraordinarily low cut-ups in the treble. In the voicing room the sound was piercing and painful to hear, but in the church it is by no means too loud. Rather, it has an unusual haunting quality, and its sound seems almost to float around the room.

The installation of the organ in the church began in June 2003. Joyce Jones played the dedication recital on August 20, 2004, and the Jackson AGO chapter in conjunction with the church sponsored a recital by Ken Cowan on February 18, 2005. Since that time, many visitors have examined and played the organ, and the instrument has proved itself to bean ideal vehicle for handling the varied requirements of the Baptist worship service, as well as displaying enormous versatility in the performance of the solo organ repertoire from all periods and schools. Michael Quimby has achieved a remarkable unity and integrity in the tonal design of this instrument in spite of its disparate origins. The overall concept is probably closer to the original Skinner organ of 1939 than to anything else, and although only 19 ranks of the E.M. Skinner & Son instrument have survived to be incorporated into the new organ, one can but hope that were he still alive, Mr. Skinner might approve of what has now been done. In its revival and development of the “Heroic Style” of instrument from the late 1920s through the early 1930s, the First Baptist Church organ is a milestone in the evolution of the American pipe organ, and as such it has already begun to make its mark on the musical life of Jackson and beyond. 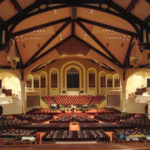 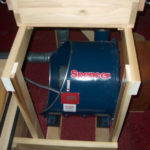 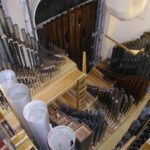