DAUPHIN WAY UNITED METHODIST CHURCH’S old organ was built by the Reuter Organ Company of Lawrence, Kansas, in 1956, and was the firm’s Opus 1195. It had 3 manuals and pedals with 44 ranks of pipes. By the beginning of the twenty-first century this instrument was beginning to show its age. This was true both with regard to its tonal design, no longer suited to modern liturgical requirements, and its mechanism, which was starting to become unreliable. Looking around for a suitable replacement, the church settled on the Warrensburg, Missouri firm of Quimby Pipe Organs, Inc. Michael Quimby, QPO’s President and Tonal Director, has designed a new 4 manual-and-pedal organ with 71 ranks of pipes, 27 of which were retained from the old Reuter organ and revoiced to blend with the new instrument.

While the Quimby firm prides itself on being able to produce organs that sound good in almost any building, in the case of Dauphin Way the extremely fine acoustics of the church help to enhance the voicing in ways that cannot be achieved so well in a dead acoustic. The voicing is further enhanced by the way that the pipework is laid out on the windchests and by the design of the windchests themselves. All manual flue ranks, except for the offset windchests used for ranks which are duplexed or unified, are placed on QPO electro-pneumatic Blackinton-style slider windchests. Electro-pneumatic pouch wind chests are used for the offsets.

The casework, which is matched to the classical architecture of the church, is designed to project the sound of the instrument to the optimum degree. In particular, the very attractive new casework of the Antiphonal division is modeled on some of the Greek Revival cases produced in the middle of the nineteenth century by American organbuilders such as the Hook Brothers of Boston. Tonally the instrument is unusual in a number of ways. First, it has four enclosed manual divisions, whereas most instruments of this size would only have two or three. Secondly, the 32 ft. and 16 ft. reed stops are all full-length all the way down to low C, rather than being half-length to save space and money, as they would be in many instruments of this size. There are no so-called “digital” electronic ranks in the organ, and all the ranks consist entirely of real pipes. The instrument contains certain features of the “Orchestral” style of organ, popular in the early twentieth century, which QPO has played a leading part in reviving and developing over the last decade or so. Among these, this particular instrument makes use of QPO’s exclusive design of French Horn stop, developed by head voicer Eric Johnson and first used at Canyon Creek Presbyterian Church in Richardson, Texas. For the first time in a new QPO organ, the Dauphin Way instrument has revived the use of the Flared Gamba stop, similar to those used by Ernest M. Skinner in the early 1930s. There is a matching Flared Gamba Celeste stop, and indeed the instrument contains a total of five Celeste stops, a feature generally confined to instruments more than double the size of this one. The organ is designed to be versatile enough to play from every national school and period of musical composition, and the brilliant choruses are designed to be equally at home with classical and orchestral styles of music. 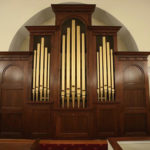 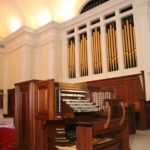 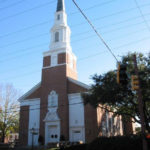 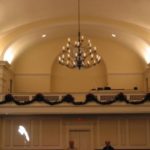 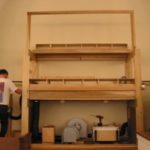 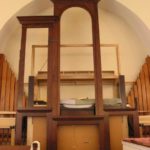 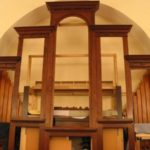 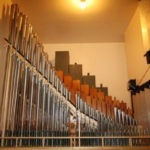 Another view of Swell Division 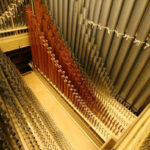 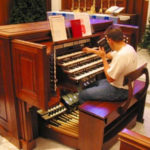 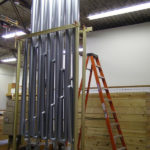 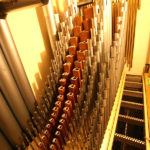 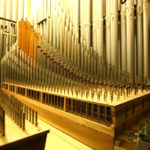 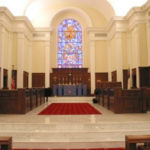 Original chamber openings in the Chancel 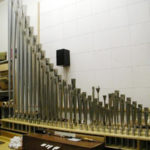 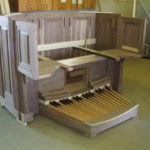 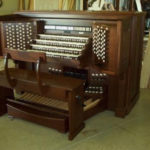 Completed console in the shop